This page lists some example and notes on different integration of CLI modules in different frameworks including CTK (see Documentation/Command_Line_Interface). The first interoperability testing was done during the third VPH NoE Imaging workshop hold in Lyon, France on October 22-23, 2012. It will be continued in consecutive hackfests. The aim is to try to plug in CLI modules in CLI compatible frameworks and come up with possible improvement of the CLI standard, advice to CLI module and CLI framework developers.

These first tests mainly concern the integration of niftyreg (registration algorithms from UCL). The different stages of integration are: load, execute and results. Meaning that the CLI module can be loaded. executed and provides the same results as if it was run only from the command line. The problems we encountered were:

It would be interesting to create test CLI modules for these integration tests. For example one that exposes all possible types of options, one running a simple algorithm without any dependencies (as niftyreg) and one with dependencies.

Some thoughts on the tested platforms:

The test datasets source_2down.nii and target_2down.nii were obtained from BrainWeb and ADNI.

Here are the snapshots of niftyreg on the different platforms:

This interoperability test was done under Windows 8. Similar steps can be performed in other platforms.

This can be easily solved by copying GIMIAS's CLPs in a different folder, let's say <CLP_folder>, along with its DLL dependencies (for finding out the DLL dependencies of a CLP, a program such as Dependency Walker can be used).

After creating <CLP_folder> and copying the necessary files in it. Start CTK's CLME, go to menu "Module" and choose "Options". In "Module Settings" go to "Search Paths", and then add <CLP_folder> to the search paths. Press "OK" and the CLME will scan <CLP_folder> and load the CLPs.

If the loading process fails, you are probably missing a DLL dependency, close the CLME and go to the cache folder (<user_directory>\AppData\Local\CommonTK\CommandLineModuleExplorer\cache on MS Windows). Clear the content of that directory, add the additional DLL to <CLP_folder> and then start the CLME again.

If a CLP shows up in the list with a warning sign, place the mouse on top of the CLP's name and look at the warning message. Most likely the XML that defines the CLP has a compatibility problem with the CLME, which means that is does not adhere to the CTK XML Schema. See the definition of the Schema, correct the XML of the CLP, clear CLME's cache folder as described in the previous paragraph, and start the CLME again.

After following these steps, you will be able to see and use your CLP in the CLME. This means that you can share your GIMIAS's CLP with any CTK user at any time, by just sharing your CLPs executable file and its DLL dependencies.

The following image shows GIMIAS's CLPs loaded in CTK's CLME. The "Create a DICOM Series" CLP is selected. The "Settings" dialog is also shown, indicating how to add the CLPs directory to the CLME's search paths. Notice that some CLPs are shown with a warning sign, so their XML definitions has to be corrected. 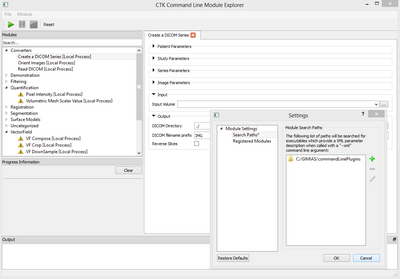 Taverna Workbench is an open source Workflow Management System written in Java. GIMIAS's Command Line Plugins (CLPs) can be used in Taverna Workbench for creating medical imaging workflows composed of several filters. In order to be able to do this, the Center Computational Imaging and Simulation Technologies in Biomedicine (CISTIB) at the University of Sheffield has created a Taverna Workbench plugin for GIMIAS.

General instructions on how to install GIMIAS Command-Line Taverna Plugin can be found here.

In this interoperability test, a CTK Command Line Module was created and tested with GIMIAS Command-Line Taverna Plugin. The sample plugin is called CopyPlugin. It is a simple code to open a VTK ASCII file containing a PolyData, and save the contents of the file on another VTK file. The plugin code can be accessed here.

The result was successful, which means that GIMIAS's CLPs and CTK's Command Line Modules can be combined to create processing workflows in Taverna Workbench !!. 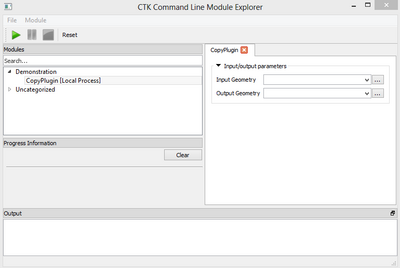 The CopyPlugin Command Line Module Explorer can also be imported into GIMIAS, see the following image 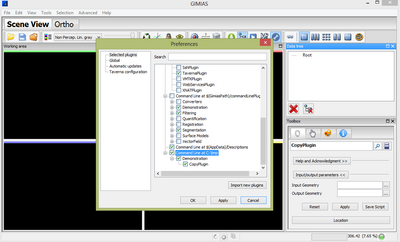 The following image shows a simple workflow that includes the CopyPlugin, after being imported using GIMIAS Command-Line Taverna Plugin. 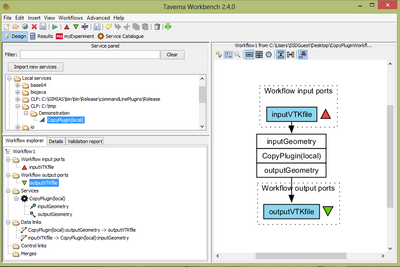 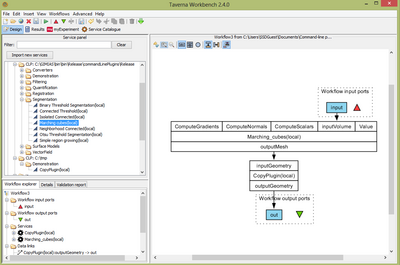